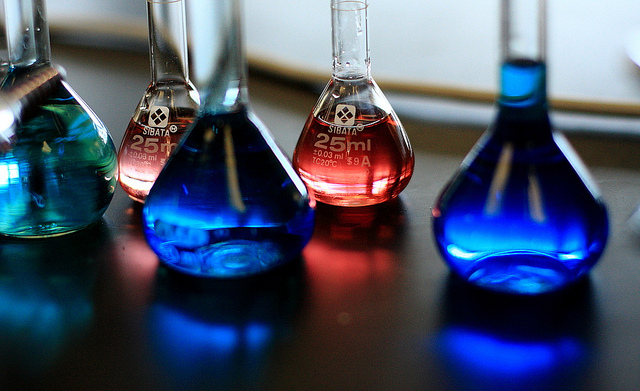 In the contest of developing solar energy as a renewable energy source, there is a global interest to develop highly robust metal catalysts/photochemical active semi-conductor materials for efficient water oxidation and carbon dioxide reduction under thermal and photochemical conditions.

The intense study of proton coupled multi-electron transfer reactions of, and those catalysed by electronically excited states of transition metal complexes is an area of joint collaboration between Professors Che Chi-ming at the University of Hong Kong and Professor Fu Wenfu at the Technical Institute of Physics and Chemistry, Chinese Academy of Sciences.  This project combines the efforts of the University of Hong Kong- Chinese Academy of Sciences Joint Laboratory on New Materials to develop metal catalysts for Artificial Photosynthesis.

Transition metal complexes in electronically excited states are highly energised and can act as powerful photo-oxidants and/or as photo-reductants for the oxidation of water to oxygen and the reduction of carbon dioxide to liquid fuels respectively. Their applications in solar energy conversion reactions are strongly affected by a number of factors: the lifetime and quantum yield formation of the electronic excited state(s); the electronic state(s) ability to undergo proton coupled multi-electron transfer reactions / atom transfer reactions; and their stability towards oxidative deterioration and demetalation upon prolonged light irradiation.

Crucial to the design of new metal photo-catalysts having practical applications is the ability to systematically vary both the lifetime and reactivity of electronically excited states of metal complexes. In this area, Che and Fu  are interested in the development of phosphorescent transition metal complexes, both in discrete molecular form and incorporated in polymeric materials with very long-lived, high energy triplet excited states with lifetimes in the millisecond time regime; vacant coordination sites for inner-sphere atom transfer reactions; and, in the case of water oxidation reaction, be able to display long-lived oxygen to metal charge transfer excited state for excited state bi-molecular reaction with water, eventually giving rise to  oxygen.

Of particular interest is the development of photo-catalysts from inexpensive and biocompatible metal complexes such as that of iron, but the challenge is to search for the right set of auxiliary ligands that can give rise to long-lived triplet excited states in solutions under ambient conditions.

His recent research in metal-oxo chemistry includes; the mechanism of water oxidation to oxygen by structurally defined, highly oxidizing mono-oxoruthenium(V) and cis-dioxoruthenium(VI) complexes both by experiments and by DFT calculations, photochemistry of luminescent cis-dioxometal complexes of d2 metal ions, water oxidation by M=O complexes with long-lived, emissive triplet excited states, and oxidation chemistry of in situ generated mono-oxoiron(V) and dioxoiron(VI) complexes in solutions.

Che and his team has developed the means whereby very long-lived triplet excited states with lifetimes close to 1000 microseconds can be generated in solutions. They identified a Au(III) photocatalyst for light induced reduction of water to hydrogen and for light-induced oxidative C-H bond functionalisation of amines by oxygen.

To complement Che and his team's achievements, the expertise of researchers from Chinese Academy of Sciences has contributed to devising new metal catalysts for the photochemical reduction of water to hydrogen and carbon-dioxide fixation. A highly efficient photocatalytic system for hydrogen production by a robust hydrogenase mimic in a aqueous solution was recently reported. Fu and his team have been working on the design of supramolecular photocatalysts consisting of Cu(I), Co(II) and Ni(II) complexes with long-lived excited states capable of reducing CO2 to CO and CH3OH.

These complexes exhibiting absorption bands in the visible region are used as photosensitizers and/or sites for CO2-reduction. The Chinese Academy of Sciences' researchers are working towards the development of photochemical active transition metal complexes covalently linked to nano-carbon materials (e.g., graphene) and/or semiconductor materials (e.g., TiO2 and Ta2O5) and impregnation into MOF CO2 capture membranes for the conversion of CO2 and H2O to CH3OH or HCOOH upon irradiation with visible light.

A Joint Laboratory in partnership with the Chinese Academy of Sciences.